Latest Articles
Thaipusam in Singapore: 5 things you need to know about this vibrant Hindu festival
Thaipusam Festival In Malaysia 2021
Significance of feeding crows
10 Must Know Significance of Giving Roti to Cow
The Story of Sharabha

Ganesha Chaturthi is one of the major Hindu festivals celebrated in India. It celebrates the birth of the elephant-headed God, Lord Ganesha, the son of Lord Shiva and Goddess Parvati. The festival is observed on the Krishna Paksha Chaturthi (4th Waxing Moon) in the month of Bhaadrapada (Aug – Sep). During the Ganesha Chathurthi festival, Ganesha idols are installed in homes and public pandals. They are then worshipped for ten days and on the 11th day, the idols are immersed in water bodies. The 11th day is called Ananda Chaturdashi, and the process of immersion is termed Ganesh Visarjan.

Traditionally, idols of Ganesha were made using clay from nearby water bodies. They were also immersed in them on the last day of the festival, signifying the cycle of creation and dissolution. Later, huge idols made of Plaster of Paris were made, as they are more affordable and light-weight. 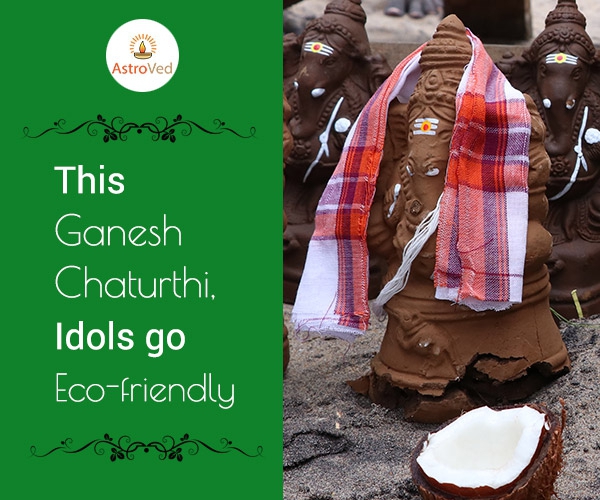 Statues made from Plaster of Paris are colored with artificial paints. These contain chemicals, which pose dangers to the environment and water bodies.

To keep the environment safe, Mumbai artisans in Mumbai have begun to adopt eco-friendly ways to make Ganesha idols. One artisan called Dattadri Kothur makes idols using eco-friendly clay to make what he calls Tree Ganesha. This is a very unique concept and its most interesting feature is that it has a seed inside and can grow into a plant if one pours water, once the festival ends. After the idol dissolves, in four to ten days, a plant comes out of it. Artist Rohit Vaste, on the other hand, makes idols of Lord Ganesha with paper ensuring that it can be recycled later on. Nowadays, even decorative items used in pandals are made using eco-friendly materials.

An NGO called A Hundred Hands has been promoting eco-friendly Ganeshas for some years, in Bengaluru. The idols are made using clay but they are air-dried. They are sculpted by hand or molded using natural materials like multani mitti, bamboo, turmeric and gheroo. After the immersion, the mud can be re-used in the garden, etc. Another trend is the chocolate Ganesha which is immersed in milk and then given to poor kids. An NGO called Sprouts International also makes idols that become food for fish. Some use sugarcane and coconut husks.