What is Durva Ashtami?

Durva Ashtami is a unique occasion, that celebrates the spiritual significance of the sacred Durva grass. Ashtami means the eighth day, and this sacred occasion is observed on the eighth Ashtami day in the bright moon fortnight of Shukla Paksha, in the month of Bhadhrapadha (August- September). This festival is celebrated predominantly in the Eastern regions of India, like the state of West Bengal, where this is actually known as Durvashtami Brata, that is, Durva Ashtami Vrat.

What is the importance of Durva grass?

Durva grass is regarded as a symbol of prosperity. Some scriptures believe that this emerged from the few strands of hair that fell from Lord Vishnu’s arms and thighs, when he took Kurma Avatar, as the giant tortoise and supported the massive Mandara mountain, during Samudra Manthan, the great churning of the milky ocean. Some others hold that this issued out of the giant snake Vasuki’s tail. Also, some drops of Amrut, the elixir of immortality that came out then, also fell on the Durva grass and this has made the grass, all the more auspicious. The importance of this grass has also been explained to Yudhishtira by none other than Lord Krishna himself. It is hence believed that worshipping Durva grass on this Durva Ashtami day with faith, will get honest desires fulfilled and that consuming only raw food on this day, will rid people of sins. 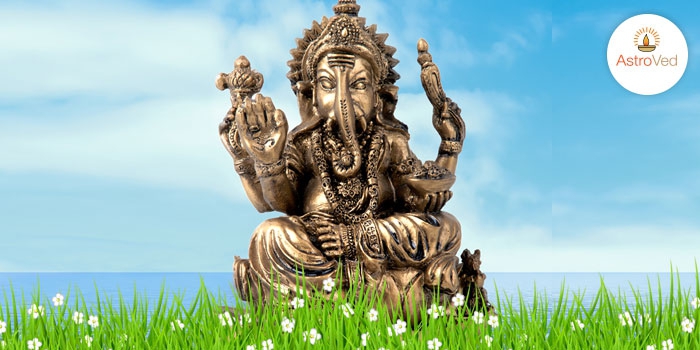 What is the legend associated with Durva Ashtami?

There is an interesting legend associating Lord Ganesha with the Durva grass. Once, a demon by name Analasur began harassing the world and on the request of the Devas, Lord Ganesha fought with him and in the end, simply swallowed him. Thus the world was saved from the atrocities of the demon, but it caused serious stomach pain to Ganesha. The Gods tried to soothe him, with Indra giving him the moon for wearing on the forehead for cooling effect; Varuna showering him with rain; and Lord Vishnu bestowing him with a lotus, but none had any significant effect. It was then that as many as 88,000 ascetics performed Archana to the Lord with 21 blades of Durva grass each, and the Lord got miraculously relieved of his physical discomfort. Thus, Durva grass, known as Arugam Pul in Tamil, became Ganapathi’s favourite and people started worshipping him with 21 blades of Durva grass, especially on Ganesh Chaturthi day.

As per epic Ramayana, it was a single blade of this Durva grass only, that Sita placed between herself and Ravana while in captivity in Lanka, when she advised him about taking the virtuous path and warned about the consequences, if he acted otherwise.

How is Durva Ashtami observed?

Durva Ashtami, observed with devotion, is believed to bring in tranquility, prosperity, and harmony in life, peace and blessedness to ten generations of ancestors, and also help the family legacy move ahead through many future generations. Hence this occasion is celebrated with faith, piety and enthusiasm, especially by women. They get up early in the morning, bathe, wear fresh clothes, observe rituals and do special puja to Durva grass, with incense sticks, flowers, fruits, rice and curd. They also offer the grass to the Gods with its tip facing East and also worship Lords Shiva and Ganesha on this day. Many observe fasts too, and donate food and clothes to the Brahmins and the needy. On this day, women also pray for the long life and wellbeing of their children.