An interviewer for the literary magazine Paris Review once asked Toni Morrison, American novelist / editor / Professor Emeritus at Princeton University, about her habit of beginning her writing before dawn. Toni Morrison replied, “I realized that I was clearer-headed, more confident and generally more intelligent in the morning. The habit of getting up early, which I had formed when the children were young, now became my choice. I am not very bright or very witty or very inventive after the sun goes down.”

This made me curious about the placement of the Sun in her birthchart as she clearly is tuned into respecting and following the Sun’s energies for illumination. I ran the chart for Toni Morrison (birth name: Chloe Ardelia Wofford) for February 18, 1931 at 11:00 AM EST (UTC -5.0) in Lorain, Ohio, USA (41n27, 82w10) in Goravani software using settings similar to AstroVed’s (Calc Type = Full, Moon from Earth’s = Center, Nodes = Mean).

The source for Toni Morrison’s birth data comes from AstroDataBank which rates the reliability of the data as AA (an excellent rating) with the source being quoted from her birth certificate/birth record.

The Sun in her chart is in Aquarius, a generous and humanitarian sign, in the 10th house of career (looking at her chart from the Ascendant of Taurus). The Sun represents soul, so wherever the Sun is within a birth chart is a strong focal point.

The Sun placed in her 10th house of profession supports success in her career and can grant some leadership skills. It is not surprising her preferred writing habit is to take advantage of the early morning energy of pre-dawn / dawn as the Sun gives important energy for her optimal performance with career tasks.

In addition, her Moon is also in Aquarius. The Moon rules mind and emotions. The Moon in the 10th house of career can enable writing and publishing. The Moon has nurtured her work both as an author and an as editor who has helped others get published.

The Moon is a feminine energy planet and also represents mother. Toni Morrison has noted, “My mother believed something should be done about inhuman situations.” Her novels have been described as “dangerously true fictions”, and she has not shied away from tackling difficult subjects such as “incest, child abuse, murderous mothers and ferocious love.”

Toni Morrison worked in publishing for 20 years at Random House. She is known for being graciously supportive in helping several black authors get published. Morrison has said, “When I went into publishing, I thought, the best I can do is to publish the works of those who are out there – like Angela Davis, Huey Newton – and the literature. And let it be edited by someone who understands the language, and understands the culture.” One of the books she published during that time was the autobiography of beloved sports figure Muhammad Ali.

Toni Morrison later said, “For a woman to say, I am a writer, is difficult,” and then she qualified it, “Well, it isn’t so difficult anymore, but it certainly was for me and for women of my generation or my class or my race.”

As a writer, she has achieved a high level of success with international popular and critical recognition. She has received many notable awards including the Pulitzer Prize, American Book Award, Nobel Prize for Literature and US Presidential Medal of Freedom (the highest civilian award in the United States).

While she does not like to be called a “poetic writer”, she does welcome the description “black woman writer.” Her most recent novel is God Help the Child published in 2015.

Her advice to aspiring writers is: “If there is a book that you want to read, but it hasn’t been written yet, you must be the one to write it.”

“Morrison is best known for her exceptional ability to convey the experience of the African Diaspora while simultaneously infusing it into the mainstream of the American literary tradition. ‘Our silence has been long and deep,’ she wrote, ‘In canonical literature we have always been spoken for. Or we have been spoken to. Or we have appeared as jokes or as flat figures suggesting sensuality. Today we are taking back the narrative, telling our story. The narrative line is the way we discover the world.’ One of her colleagues wrote, ‘If I were to describe her writing I would say that she has the insight of a shaman and the lyricism of a great poet.’” 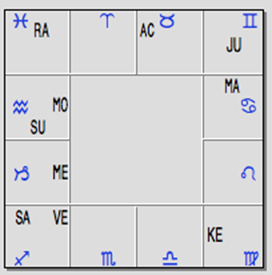 The planet that rules Morrison’s Ascendant (AC) in Taurus, her 1st house of self, is Venus, planet that rules the arts. Venus is placed in her 8th house of obstacles, change and transformation. The 8th house is also sometimes called the “house of evolution.” This has helped propel her to be on a cutting edge in her outlook.

Her Moon is in the star or Nakshatra of Shatabhisha. This Birthstar can give blessings for material prosperity. Shatabhisha is ruled by Varuna, an archetype of the rains and oceans associated with purification and cleansing on all levels. The connection to Varuna can give a deep sense of integrity and a love for fairness.

The Moon in Shatabhisha can give interest in mysterious topics. Morrison’s birthstar supports her to write about “hidden” stories and to reveal secrets with truthful words.

One of the names of Jupiter in Sanskrit is Guru or Teacher. Jupiter is a planet associated with higher education. In Morrison’s chart, Jupiter sits in the sign of Gemini in her 2nd house of finance. She has earned supplemental money teaching at several universities including The State University at Albany, Bard College, Yale and Rutgers University. In 1989, she accepted appointment as the Robert F. Goheen Professor of Humanities at Princeton University (now retired).

Gemini is represented in Vedic tradition with 2 symbols: a man with a club and a woman with a lute, representing a great range of energies. Often, if Gemini is the 2nd house of finance, a person may have ability to earn through more than one stream of income, so it is not surprising that she earned income from this other source of university teaching in addition to her literary work.

Jupiter always sends energy into whatever signs are 5, 7 or 9 houses from wherever he sits (counting where Jupiter is sitting as 1). This is also known as casting aspect, and different planets cast aspect in different ways. From Gemini, Jupiter does send energy into her 10th house of career as Aquarius is 9 signs away from where Jupiter sits. So from Morrison’s 2nd house of finance, Jupiter is giving benevolent blessings for her ability to make money through her career. This is a favorable placement for her.

In addition, Saturn, planet of work ethic rules her 10th house of career. He also sends energy into whatever signs are 3, 7 or 10 houses away from wherever he sits. In her chart, Saturn casts aspect into her 10th house of career as Aquarius is 3 signs away from where Saturn is sitting in Morrison’s birth chart. Saturn can bless someone with energies of discipline as well as longevity and perseverance. Saturn has provided additional support to Morrison’s ability to have a long and productive career

She has been blessed with stabilizing energies of balance as she has five planets in masculine signs and four planets in a feminine signs.

This helps her be centered in her purpose and gives her connection to a wide range of human emotions and experiences as all the elements are represented.

From her vantage point of success Morrison suggests, “As you enter positions of trust and power, dream a little before you think.”

Valli is available for ½ hour and 1 hour Live Astrologer Consultations (LAC) at AstroVed (USD global version only). She encourages people to create a free account at AstroVed and run free reports about their own Birthchart, Birthstar, Moon sign, and Planetary Influences. This is a simple way to begin to make friends with astrology. She invites everyone interested to learn more about Vedic astrology to join a newly formed Facebook group for Astrology Club – AstroVed.