Bhagavad Gita Chapter 15: “Know Me As the Supreme Personality” 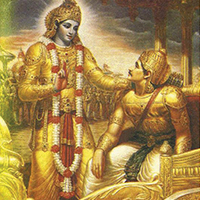 “Scriptures refer to an Ashvatth, the sacred Fig tree with roots on top and branches below, whose leaves are the Vedic hymns. The 3 Gunas nourish its branches extending up and down, and its tender buds remain the sense objects, while its roots hang down, causing Karmic flow in the human form. However, one should chop off this deep-rooted Ashvatth with the ax of detachment and look for the Supreme Lord at its base, from whom universal activities emerged. And the liberated, who are free of delusion, desire, and attachment, dwell on self and God; going beyond pleasure and pain, they reach My abode, from where none will come back to this temporal world. Though these worldly souls are also part of Me, their material nature binds them to struggle with their senses. However, while leaving the old body, the embodied soul carries the mind and senses with it and enters the new frame with them. The bodily soul enjoys the sense objects through sensory perceptions bunched with the mind. But only the wise perceive the soul’s stay in the body and its departure. Know Me as the Sun’s brilliance, Moon’s radiance, and fire’s brightness, and that My energy nourishes all life forms. Then, as the fire of digestion in the stomach, combined with inhaling and exhaling breath, I digest food and assimilate it. Also, dwelling in the hearts of all beings, I contribute both to memory and forgetfulness. And it is Me, the Vedas reveal. While creation contains the perishable beings in the material world and the liberated imperishable ones, the Divine Personality stays beyond these as the ultimate controller and supporter. And celebrated in the Vedas and scriptures, I transcend both the perishable matter and the imperishable soul. So, Oh sinless Arjuna, worship Me, as the Supreme Divinity! The understanding of this secret knowledge can lead one to enlightenment! 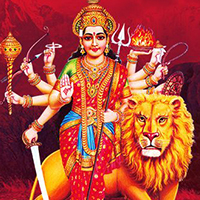 Those who chant it regularly can get her blessings and protection. 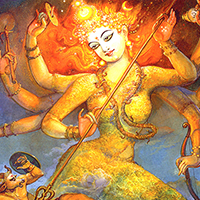 This Mantra has the power to remove all Doshas in your life. 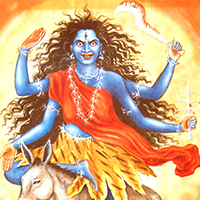