Navaratri is a Hindu festiva ...

Navaratri is a popular Hindu ...

What is Gaja Kesari Yoga and How it Impacts You

Gaja Kesari Yoga is considered as one among the highly auspicious Yogas of Vedic astrology.

Yoga or Yogam refers to a favorable formation in a horoscope (the natal chart or the birth chart) that can bring various benefits to the natives. This remains an antithesis of what is known as the Dosha or Dosham, which refers to an astrological affliction that can cause hardships to the one affected by it.

‘Gaja’ in Sanskrit means elephant, and ‘Kesari’ is the lion. The elephant may be huge and also have tremendous strength, but when the fierce lion attacks, even a herd of elephants may not stand the assault. Similarly, even when any Dosham afflicts a person, its effects will be nullified if he or she is blessed with this Gaja Kesari Yoga. This Yoga is believed to be so beneficial, and as efficacious as the name itself suggests.

It is also said that this Yoga is like the combination of these 2 mighty animals, and can bestow a person with, the lion’s supremacy and the elephant’s majesty. 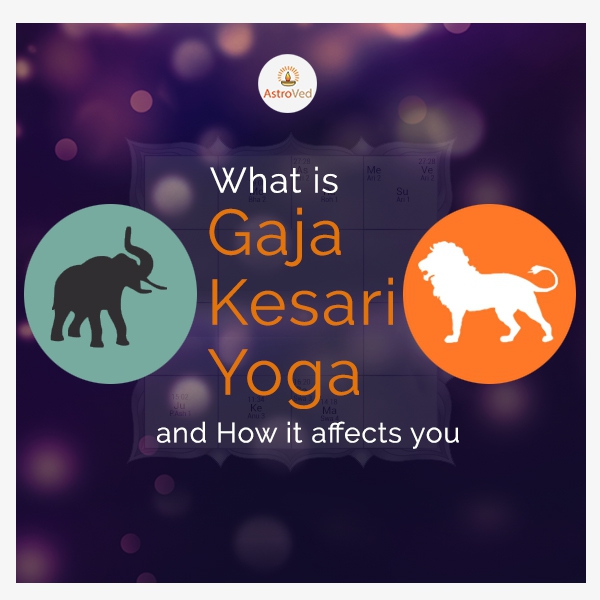 How is Gaja Kesari Yoga formed?

The 1st, 4th, 7th and the 10th Houses of a horoscope are known as the Kendras or the Quadrants. These are regarded as the very pillars of any birth chart and hence remain as significant Houses.

Gaja Kesari Yoga involves all these three – the Quadrants, Jupiter, and the Moon.

A Gaja Kesari Yoga is said to be formed in a horoscope when the Moon is placed in any of the Quadrant Houses, as compared to the Jupiter, or vice versa. That is, if Jupiter is in the 1st House in a natal chart, then the Moon should be placed in any one of the Houses 1, 4, 7, or 10, for this Yoga to be formed in that horoscope and for that person. This is the same as Jupiter’s placement in the Moon’s Quadrant, and hence, such a structure also gives rise to this Yoga.

There are, however, some differing views among astrologers on the criteria for this Yoga. A few take things like the Lagna, the Ascendant, and the aspects (that is, casting of glance) of these planets, too, as requirements. But the Quadrant-Jupiter-Moon combination, as discussed, remains the most accepted Gaja Kesari Yoga criteria.

But, for this Yoga to be effective, it is essential that the planets Jupiter and the Moon are not afflicted by any malefic planet, and the positioning of other planets in the horoscope is also not adverse.

Gaja Kesari Yoga is an astrological blessing that can bestow a person with wealth, fortune, success, fame, longevity, and happiness in life.

But its beneficial effects may depend to a large extent on the quality of the place where the planets Jupiter and Moon are positioned in a horoscope. When these planets are in their own Houses, that is, in the ones ruled by themselves; or, are placed in their friendly Houses, this Yoga can prove to be a great blessing. It is also said that when the Ascendant is Sagittarius, which is ruled by Jupiter, the Yoga can operate at its best. But when Jupiter and the Moon are found debilitated or in not-so-friendly Houses in the horoscope, the natives can hope only for moderate results, even if they have Gaja Kesari Yoga otherwise.

But at its best, this can be nothing short of a Raja Yoga, which can help a person to scale new heights in life.

True that you have got a bird’s eye view on the Gaja Kesari Yoga now, but there is nothing like consulting an astrologer on this. You will then be able to understand for sure if you are blessed with that Yoga and also, how to enhance its positive effects. While professional astrologers who are experts in their field are available at many places, people can also seek the assistance of online astrology, with particular stress on such Yoga formations in their horoscope.

Trust you will be able to avail of their services to your best advantage and enrich your life to the maximum.

The importance of mahalaya paksha