According to Vedic astrology, the upcoming solar eclipse on Dec. 26, 2019 (IST) will happen on a day of rare planetary alignment. The 6 Major planets- the Sun, Moon, Jupiter, Saturn, Mars and Mercury will be encircled by the snake planets Rahu and Ketu. Furthermore, during this eclipse, four planets- the Sun, Moon, Mercury, and Jupiter will be in the star Moola, ruled by Ketu. On this day, it is not advisable to start any new ventures or money-making initiatives. Instead, it is the day for clearing your karmic baggage, pacifying your ancestors, and self-introspection.

Impact of this Rare Solar Eclipse

During the upcoming eclipse, the Sun, along with the Moon, Mercury, Jupiter, and Saturn, are afflicted by Ketu in the sign Sagittarius, the house of Jupiter. Vedic Astrology principles explain that the below areas signified by the planets will be impacted during the solar eclipse.

On a personal level, you should be careful while dealing with the government and people with power. Your intuition and inner guidance may fail you. You should also take care of your communication and health, especially the stomach and the lower parts of the body. It will be good for you to remember and honor your ancestors by performing Tarpanam (ancestral offering).

In Vedic astrology, the eclipse is considered as a negative omen that may adversely impact countries in which the eclipse is visible. On a mundane level, the spread of epidemic diseases, non-cooperation from neighboring countries, law and order issues, negative influence on world leaders leading to wrong decisions, and an overall negative impact affecting people at large may be experienced.

Vedic Rishis have recommended remedies to be performed on the day of the eclipse and after eclipse hours, which can have a positive influence on both a personal as well as a country level. People born under the following stars should be cautious and perform remedies.

Dos and Don’ts on Eclipse Day

AstroVed will perform the Tarpanam ritual and other powerful Remedial Rituals on your behalf on the eclipse day to mitigate the negative effects of the eclipse. 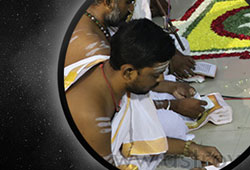 According to Dharma Shastra (collections of treatises on sacred duties), chanting Udaka Shanti Mantra (compilation of important mantras from Yajur Veda, second oldest Veda) during the eclipse period can remove Doshas (afflictions) and give you multifold blessings of this great mantra’s benefits when compared to chanting it on normal days. 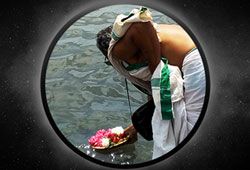 Tarpanam for Ancestors During Eclipse 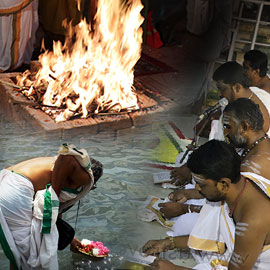 The upcoming solar eclipse on Dec. 26, 2019 (IST) will happen on a day of rare planetary alignment. The 6 Major planets- the Sun, Moon, Jupiter, Saturn, Mars and Mercury will be encircled by the snake planets Rahu and Ketu. It is the day for clearing your karmic baggage, pacifying your ancestors, and self-introspection. Invoke the blessings of your ancestors and the soul planet on Solar Eclipse day.

We will not be shipping any Prasad for this service.