The item has been added to your cart.
Keep Shopping
CheckOut
Due to the global health crisis, there is a delay in shipping prasad to our members. We are holding your Prasad safely with us until we can start shipping them again. We truly appreciate your patience.

LAST CALL: INVOKE SATURN ON HIS BIRTHDAY FOR RELIEF FROM MALEFIC EFFECTS & BLESSINGS FOR ACCOMPLISHING GOALS

He is a great teacher, unless you are given hardships in your life you are not going to learn. Saturn is the most important planet as he is the one who matures the soul. You will be going through a very difficult time during Saturn. Even Gods are not exempt from the influence of Saturn. Gods also have lessons to learn.

Invoke Saturn on His Birthday for Relief and Blessings

Saturn is the strictest and most disciplined among all the planets in Vedic Astrology and has a strong influence on your life. Saturn will give you life experiences based on your past life karma. It is considered auspicious to appease Saturn on his birthday and seek relief from his malefic effects. If you are undergoing Saturn Dasa/Bhukti (major/minor planetary period), Sade Sati (71/2 years of Saturn), 8th House Saturn, 4th house Saturn, or Saturn afflictions in your birth chart, participation in remedial rituals on Saturn’s birthday are particularly important for you.

Why is Saturn’s Birthday Extra Powerful This Year?

Saturn’s celestially strong positions make his birthday extra powerful this year to appease the planet of karma and receive his abundant blessings. To help you harness Saturn’s birthday blessings on this auspicious day, AstroVed will be performing a powerful suite of ceremonies.

Saturn’s birthday is a very important day to express gratitude for his blessings and to appease him. On Shani Jayanthi (Saturn’s birthday), AstroVed is performing a special Fire Lab invoking the blessings of Saturn by chanting Saturn’s Beeja mantra (seed sound) 25,001 times. The Beeja mantra (seed sound) of an archetype is filled with enormous positive energy and has immense power to amplify and multiply the favorable blessings of the archetype.

The chanting of Saturn’s seed sounds during his birthday fire lab can give relief from his malefic effects and amplify Saturn’s positive blessings to help you develop compassion, righteousness, duty-consciousness, discipline, and responsibility. It is believed that invoking Saturn in the Fire Lab can also help you achieve your ambitions, boost your career prospects, and to lead a practical, realistic life.

AstroVed will be performing the following powerful suite of services to appease Saturn and receive his special birthday blessings. 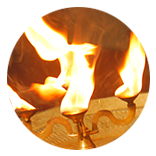 As per Powerspot tradition, performing Archana to Saturn at the following Powerspots can bestow the below benefits:

1. Thirunallaru – According to Powerspot legend, legendary King Nala was relieved of his afflictions caused by the malefic influence of Saturn at this location. Offering your prayers to Saturn at this Powerspot, considered as the primary Powerspot for Saturn, can bestow a prosperous life and reduce the intensity of Saturn afflictions

2. Kuchanoor – In this Powerspot, Saturn is believed to have self-manifested (Swaymbu). According to Powerspot legend, it is the place where Saturn was relieved of his Brahmahatya Dosha (affliction). Praying to Saturn here can give relief from Saturn Dosha and grant success in business and family wellbeing

3. Villupuram – Saturn is present in a unique Yantra form which is considered more powerful and rare, hence the name ‘Yantra Saneeswarar.’ Offering prayers here can grant relief from the adverse effects of Saturn

4. Thirunaraiyur – Here Saturn is known as Mangala Sani, the one who bestows auspiciousness, along with his consorts. Offering your prayers to Mangala Sani can bestow you with ample wealth and sound health

5. Thirukodikaval – In this Powerspot, Saturn is present in his child form. According to Powerspot mythology, he sits in a special pose with half-eyes closed praying to the presiding deity Shiva, asking for salvation of his sins from punishing others through his powerful gaze. Hence, praying to Saturn in this Powerspot can bring relief and reduce the intensity of Saturn’s malefic effects.

6. Thirukollikadu – In this Powerspot, Saturn is called as ‘Pongu Saneeswarar’ (the one who blesses abundantly). Here, Saturn has a separate shrine which is opposite the shrine of Archetype Bhairava (Saturn’s guru). Offering prayers to Saturn at this special Powerspot can bring you his plentiful blessings

7. Mayiladuthurai (Mayuranathar) – Here Saturn is seen in the form of Jwala Sani (Saturn with Fire on head). There is also another rare form of Saturn where he is seen performing Pooja to Lord Shiva. You can reduce the intensity of Saturn’s influence by propitiating him at this Powerspot

8. Sholavanthan – Known as one of the special Powerspots for Saneeswaran (Saturn), where he appeared as Swaymbu (self-manifested), performing Pooja here can give you child boon, help in recovery from losses, and the reunion of family members (which occurred during the Saturn affliction period) 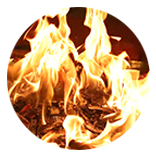 According to sacred texts, this special fire lab to Saturn by chanting his Beeja Mantra (seed sound) 25,001 times on his birthday can help you be compassionate, righteous, duty-conscious, responsible, disciplined to achieve your ambitions on personal and professional fronts and to lead a practical life 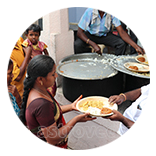 According to scriptures, feeding the poor and needy is the highest of all charities. It is believed that food feeding on Saturn’s birthday can help you receive his graceful blessings and free you from problems in life 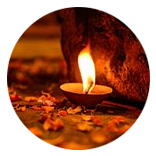 Sesame seeds are the favorite of Saturn. As per Powerspot tradition, lighting sesame oil lamps can appease Saturn and reduce the intensity of his afflictions 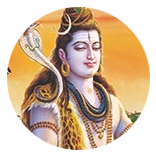 As per Powerspot practices, offering ‘Pin Vilakku,’ lighting lamp at the backside of Shiva Lingam can help you get rid of negativity and fulfill your wishes Saturn’s birthday is a very important day to express gratitude for his blessings and to appease him. On Shani Jayanthi (Saturn’s birthday), AstroVed is performing a special Fire Lab and Poojas to appease the planet of karma and receive his abundant blessings. Participate in our Saturn Birthday ceremonies to seek relief from his malefic effects and accomplish life goals.

Please Note: We will not be shipping any Prasad after performing Saturn remedy rituals. Saturn is the most dreaded of all planets. During his transit/major period/minor period, he puts people who are under his influence through trials and tribulations. Participate in AstroVed’s Ultimate Saturn Remedy Program during Saturn’s birthday to reduce the negative impact of Saturn and gain blessings to overcome the sudden, major life-changing problems you might have to face.

Please Note: We will not be shipping any Prasad after performing Saturn remedy rituals.