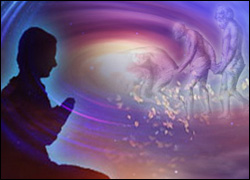 Your Ancestors are coming and they will be with you for 15 Moons of Mahalaya Paksha. It is a gift giving time from the ancestors to their descendants living on this earth plane. A time you can ask for and receive all kinds of help from them. This two week period is called Mahalaya, and it is the most important period of the year, for you to connect with and receive your ancestors blessings. Even the enlightened yogis and rishis await for this time, which comes only once a year to receive the blessings from their own ancestors.

Why You Should Help Your Ancestors?

To Live a Successful and Peaceful Life, monitor both areas regularly and fix problems when needed. Ancestor’s who departed with unfulfilled desires can be especially problematic.

Tarpanam can change your Destiny and it is the most effective means for helping departed loved ones and ancestors. During each of the 15 Moons of Mahalaya Paksha, the sacred “Mahalaya Tarpanam” ritual will be performed in Kerala, because this is a very special time, it’s important that you have specialist priest to do this ceremony for you. Our Priests who specialize in ancestral rituals will ensure that your genetic line is spiritually "well fed". When neglected and hungry, misguided ancestors can cause havoc in all areas of your life. When appreciated and acknowledged, your ancestors are freed from their suffering and will readily assist and bless you from the other side.

This year, Mahalaya Paksha begins on September 28th and ends on October 12th. This is the most important period to appreciate your departed ancestors!The Tarpanam rituals will be performed in Kerala. It is believed that Parasurama (one of the incarnations of Vishnu) has come to this place to perform Tarpanam (ritual offerings for the dead) for the souls of the thousands of Kshatriyas that he had killed. Because of this, this place where the tarpanam is performed is considered as one of the most sacred place for conducting rituals for the dead. Given below are the importance of each Moon phase.


Why is Mahalaya Important?

“If I have to recommend one solution for every one of our problems, be it financial, relationship or health, it is doing Tarpanam (offerings to the ancestors). Miracles do happen after the performance of the rituals.” – Dr. Pillai

15 Moon Phases and Their Benefits


Why to Appease Ancestral Spirits?

Spiritually enhancing, there are two reasons for all of our everyday problems. One caused by the planets, the other by the departed spirits of our ancestors. We should constantly take care of them to live a peaceful life.

Just as there is biological lineage of transference of DNA along the family line, there is a spirit lineage too! They live in the ancestral world (Pitra loka) and can help to solve your problems during these golden 2 weeks! Your dead ancestors can solve your issues related to money, career, relationship; health etc., quite easily, if only you know how to communicate and reconnect with them.

This year Mahalaya begins on September 28th, and ends on October 12th, 2015. During the initial phase, the Moon will be in the sign Pisces which is the 12th sign of zodiac. The 12th sign signifies salvation. The shadow planet Ketu being present in this sign is significant for those who want to attain Moksha (attaining God’s feet). Tarpanam done during this Mahalaya will make your ancestor’s souls attain Moksha, liberation from the cycle of birth and death.

Mahalaya ends on October 12th when the Moon will be in the sign of Virgo. The Moon will be along with Rahu and Mercury. The shadow planet Rahu represents paternal ancestors and the tarpan rituals on this day will appease the ancestors easily.

Participate in Rituals to Lord Karuppasamy

Significance of Donating Food and Clothing

The easiest way to access God’s grace is to feed a person who is starving for food and to donate clothes. Donating food is considered to be the greatest charity of all the charities. When you donate food and clothing to those in need, it elevates your soul. There is an interesting legend highlighting the importance of donating food.

Karna, the renowned hero of the Epic Mahabharata, was a great philanthropist and he never said no to anyone who approached him for help. He had donated huge wealth and had done all kinds of charity, except for donating food.

Karna left the earthly curl after his death and reached heaven. The great charity which he had done on the earth plane was returned to him hundredfold there, but it was all material wealth and no food at all. He then realized that although he had done all kinds of charities, he did not donate food. He prayed to the God of Death, who sent him back to the earth for a fortnight, to make up for this deficiency.

Karna fed the Brahmins and poor and offered oblations of water during the fortnight. On his return to Heaven, he had plenty of food. It has been anticipated that offerings made during the period of Mahalaya Paksha benefits all the departed souls, whether they are connected to you or not.

The Art of Giving – “Dhana”

Service to humanity in an unconditional way helps to cleanse your being.

This is called “dhana” in Sanskrit and is one of the virtues. It helps to unburden you of karma and helps to clean the subtle bodies. There are many things you can give in dhana, but what is more important is to understand what to give to whom.

The Vedic Scriptures say to “Give food to the hungry, clothes to the naked, knowledge to the ignorant, teachings to the knowledgeable, teach meditation to the vital, give wisdom to the meditator and just be silent when with a wise one and share in his energy”.