The Sri Vaitheeswarar Temple in Poonamallee is located around 25 kilometers from the city of Chennai. It is a temple dedicated to Shiva. The presiding deity is Sri Vaitheeswarar, and the Mother is called Thaiyal Nayagi. 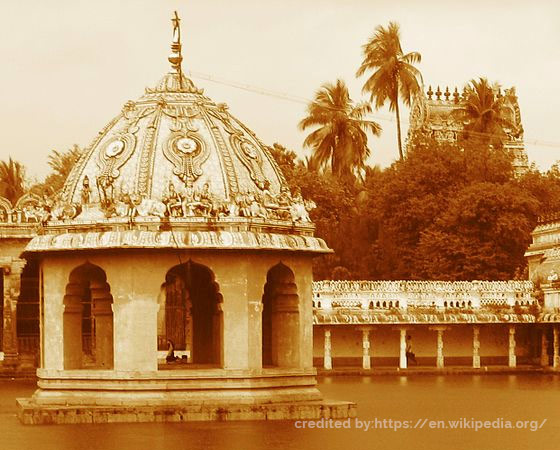 The Sri Vaitheeswarar temple belongs to the Chola period and has inscriptions on it dating back to the time of King Rajraja I. The temple has tremendous architectural brilliance and divinity. It is believed to be one thousand years old and has a lot of architectural beauty with exquisite sculptures inside the inner corridor.

The temple faces east. On the east side, there is a three-tier Rajagopuram with Thirukulam and sturdy fencing. The temple has a small entrance on the east. The eastern gate leads to the Dwajasthambam, Palipeedam, and Nandi located at the entrance of the Maha Mandapam, facing the main sanctum housing the main deity. The Nandi here is called the Vishnu Nandi.

The Rajagopuram is on the north side and has exquisite sculptures on it. The main entrance has beautiful carvings on the walls. There is a Shiva Lingam at the entrance near the compound wall. On either side of the courtyard entrance are the idols of Ganesha and Murugan.

The presiding deity is Vaitheeswarar. The deity is a huge Shiva Lingam facing the east. At the entrance of the sanctum are an idol of Alagu Vinayaga on one side and Sevvai Padham (footprints) of Angarakan on the other side, a rare symbol. There are two Dwarabalakars (Thindi and Mundi) on either side of the sanctum.

The Narthana Vinayagar, Dakshinamoorthy, and Mahavishnu are in the place of Lingotbhavar, Brahma and Durga as the niche idols on the wall of the sanctum. The Mother is called Thaiyal Nayagi. She is housed in a separate shrine that faces the southern direction near the sanctum. The Thayar is beautiful, and with her benevolent eyes, she bestows her blessings on the devotees.

The covered inner prakaram (corridor) has a pillar dedicated to Karlakattai Siddhar, who was associated with the temple. The inner prakaram houses the shrines of Surya Deva, Veeran, Vinayaka, Vishwanathar with Visalakshi, Kumbeswarar, Kailasanathar, Annapoorani, Mahalingeswarar, Maha Lakshmi and Adi Shankara. Bhairava, Chandikeswarar, Nalvar, Chandran, and Navagrahas are housed in the inner corridor of the temple.

The inner corridor also has the shrines of Nataraja with Sivakami, Somaskanda, and Murugan with his consorts Valli and Deivanai.

The temple has a vast outer prakaram (corridor), which has only a large Bana Shiva Lingam. There is a Gosala (cow shed) in the outer prakaram.

The South Mandapam has beautiful carvings in the doorways.

The Sthala Vriksham (sacred tree) of the temple is the Thazhi Panai Maram (palm tree). The temple has a huge tank (Vinai Theertha Kulam) that lies on the eastern side.

The outstanding feature of this temple is that on the 21st,22nd, 23rd, 24th, and 25th of Maasi month in the Tamil calendar, the Sun rays fall directly on the presiding deity around 06.00 a.m. in the mornings. This is called the Surya Pooja or worship of Shiva by the Sun God. The occurrence lasts for five to six minutes on these five consecutive days.

There is another distinctive feature of the temple, which is the Viduthalai Shani (freedom from Shani) near the eastern Gopuram. Here, Shaneeswara is standing separately facing the east. In front of him are Nala and Damayanti. This is the site where Nala got relief from Shani Deva.

The Sri Chakra, Subramanya Chakra, and Shiva Chakra were installed by one of the greatest Indian saints, Adi Shankaracharya, in the inner prakaram (corridor). The temple performs Abishekam (sacred wash) for these Chakras on Pournami and Amavasya.

The temple is associated with the Sun, Shani (Saturn), Navagrahas, and Sevvai (Angarakan/Mars). The temple has a very peaceful atmosphere.

Vaitheeswaran in Tamizh offers refers to a physician. The presiding deity is believed to have curative effects on diseases and illnesses. People come to the temple and offer prayers to be cured of their ailments. It is believed that the positive vibrations inside the temple provide a healing effect and cure almost all diseases.

Being a Parihara Sthalam for Chevvai Dosham, the temple performs special poojas for Sri Angarakan (Mars) every Tuesday. In the Tamizh month of Maasi, Surya Pooja takes place on five consecutive days from 21st to 25th of Maasi, when the Sun’s rays fall directly on the presiding deity around 06.00. A.M. in the mornings.

The nearest airport is the Chennai Airport, which is 15 kilometers away.

The nearest railway station is at Alandur Metro Station and Guindy Railway Station, which are both 15 kilometers away.

All buses from Chennai to Poonamallee can be taken to reach the temple.