The Peddamma Temple is one of the popular places of worship of the Mother Goddess. Also known as the Peddamma Gudi Temple or Peddamma Thalli Temple, this temple lies in the city of Hyderabad, the capital of Telangana. It lies in the famous Jubilee Hills area of Hyderabad.

This temple is dedicated to Lakshmi, the supreme Goddess of wealth and prosperity, and the divine consort of Vishnu, the universal protector. Here, she is worshipped as Santhan Lakshmi, the Goddess who can give Santhan, the progeny blessings to devotees. 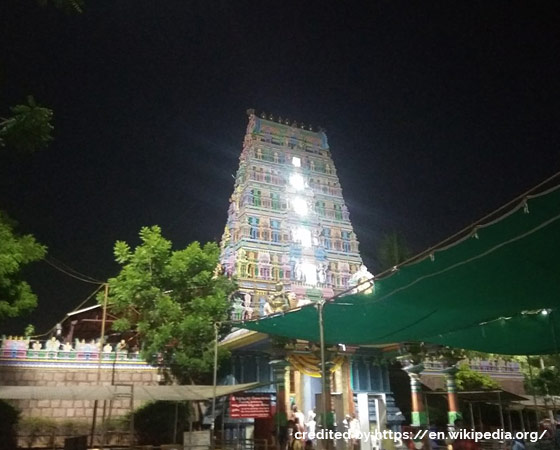 There are quite a few legends prevalent about the Goddess and the origin of her abode. One of them states that after destroying the Asura, the Goddess landed at this place and quenched her thirst in the well, located here. It adds that a shepherd found the idol of the Goddess later here, and this temple was built at the same place, subsequently.

Another famous story associates this Goddess with the fierce Asura Mahishasura and the popular legend about him. Mahisha Asura, the one with the head of a water buffalo, was a mighty Asura who did severe penance and obtained many boons. One of those boons protected him from being harmed or killed by Gods or men. He thus took himself to be invincible and immortal and started harassing both the celestial and human beings. The heaven and earth, both began reeling under his onslaught and cruelty.

But, as Mahishasura took women to be weak beings, he did not think that they could be a threat to him, and so, he excluded them while seeking the boons. And the Gods decided to make use of this fact to challenge him and put an end to his reign of terror.

With the blessings and the combined powers of the Supreme Trinity of Gods, Brahma, Vishnu, and Shiva, Goddess Durga came into being. Mighty and powerful, and riding a roaring lion and armed with deadly weapons, the Goddess marched as the head of the celestial army and took on the Asura and his forces. In the fierce battle that ensued, the Goddess overcame Mahishasura and slew him ultimately, thus providing great relief to the Gods and human beings alike.

This victorious Goddess is worshipped here as Peddamma, the divine Mother who took pity on her suffering children and turned into their savior. And true to this legend, the Goddess remains here as ‘Simha Vahini,’ that is, the one riding or seated on a lion.

As per historical accounts, the Peddamma Temple is over 150 years old, but the temple became famous in the year 1993, when its Raja Gopuram, the entrance tower was built.

The Peddamma Temple can be largely described as a medieval temple in this region.

The architecture of the temple adheres to the South Indian style. The temple is walled on four sides with a common entrance and exit. The Rajagopuram was built in 1993. The pillars of the prayer hall have intricate carvings that depict images and stories from Hindu religious epics.

The Peddamma Temple is known for its religious significance and structural beauty. Apart from the main shrine dedicated to the principal Goddess, the Peddamma Temple also has smaller shrines for divinities like Ganapathi, Saraswati, and Naga Devatha.

There are several temples for Maa Durga, who personifies Shakti. The Telangana region worships Mata as Pedamma Thalli. Peddamma is a Telugu word, which is coined by combining two words, ‘Pedda’ and ‘Amma.’ This means – ‘the mother of mothers’ and refers to the Goddess here as the ‘The Supreme Mother.’ Also, ‘Thalli’ means the Mother, and hence, ‘Peddamma Thalli’ also conveys the same sense. And ‘Gudi’ refers to a shrine or temple.

Peddamma Thalli is also known as Sri Gauramma and Sri Ammavaru. Peddamma is also believed to be a form of the village deity and is said to be one of the eleven forms of Mahakali. She is worshipped in this temple as the Mother of the universe.

It is a custom here, to offer only coconuts to the Goddess. There is also a strange practice here among the devotees, to place coins vertically at a place and make a wish. They believe that this can get them the blessings of the Goddess and fulfill their genuine desires.

The devotees offer prayers and sacrifices to the presiding deity throughout the year. There are special poojas and rituals conducted according to the Vedic traditions. The Mother Goddess blesses her devotees in abundance.

The temple is famous for some of the festivals celebrated here. The most popular among these is the Bonalu festival, observed during June-July. The temple sees huge crowds of devotees from all over the state. The festival is celebrated with religious fervor and enthusiasm. During this festival, women carry items like rice, milk, curd, and jaggery in traditional earthen pots covered with neem leaves, turmeric, and kumkum, and offer them to the divine Mother as an oblation and pray to her.

The Ratha Saptami, during February-March, is another auspicious occasion, when a chariot festival (Rathotsavam) is organized for the Goddess. The Goddess is taken around the temple in a beautifully decorated and well-lit chariot. Devotees offer fruits and flowers to the Goddess. Offering prayers during the festivals said to be beneficial to the devotees.

How to Reach Peddamma Temple

The Rajiv Gandhi International Airport lies 16 kilometers away from the temple.

The Secunderabad Railway Station lies 13 kilometers away from the temple.

Public transport buses frequently ply to Jubilee Hills where the temple is situated.