Mahishasura Mardhini is the aggressive form of the divine Shakthi, the ultimate feminine power. She was the slayer of the demon Mahishasura. Once, Mahishasura, who had the face of a buffalo did severe penance towards Lord Brahma and got from him various boons, which made him almost invincible. The most important of those boons assured him that, if at all he was killed, that can only be by a woman. Thus, fully armed with many blessings and well protected by boons, he played havoc on the universe and also on heaven, committing unspeakable atrocities on human beings and the Devas. The Gods were helpless, as only a woman could pose any serious challenge to him and it was left to the divine feminine power, to intervene and put an end to his crimes. In order to save the world, the compassionate divine mother incarnated as Durga, fought a fierce battle with Mahishasura and his army of demons, and at last killed him, thus ridding the world of his cruelties. This destroyer of Mahisha came to be hailed as Mahishasura Mardhini.

The Mahishasura Mardhini sloka which starts with this stanza invokes the Goddess and it is believed that its chanting can bestow the devotees with all welfare. 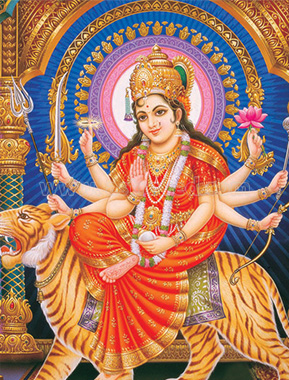