Kalikambal Temple is dedicated to Lord Kamakshi and is located in Parry’s corner Chennai. This temple was initially located in the SeaShore, and  is located to the current location, and is renowned as one of the prominent temples of South India. This temple is considered as one of the most powerful temples, which attracts a lot of devotees. This temple is believed to be worshipped by great poet, Bharathiyar, who was an ardent devotee of Goddess Kali . Thus temple enfolds a lot of mystic powers, and is believed to be one of the iconic temples of Chennai. 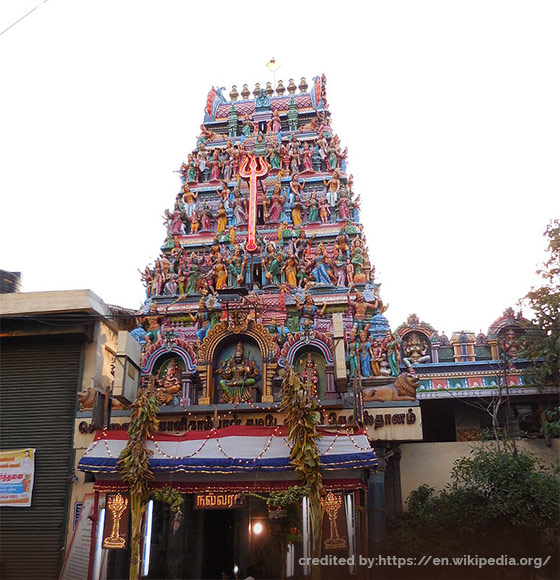 The temple of  Kalikambal  is dedicated to Maratha kings, The temple used to have a different location earlier, and was much closer to the seaside. It is currently moved this location around 16th century. This temple is believed to have worshipped by great warrior  Chatrapati Shivaji Maharaj. It was also believed that the deity was once in a fierce form, and was later changed as a soft Goddess. The chariot festival of this temple is highly prominent.

The Kalikambal Temple is built in the South-Indian Dravidian styled architecture. It  has two important deities of Shri Kaligambal, the incarnation of Goddess Kamakshi and Lord Kamadeswarar, the incarnation of Lord Shiva has been installed here. There are several other shrines for Lord Ganesha, Lord Varuna  Lord Indra, Lord Vishwakarma  and a special shrine for Lord Kubera , the Goddess Of Wealth . Gopuram or the temple tower is made of four layers, which has a lot of idols, and intricate works. This temple has Arthameru, which was installed by Sri Aadhi Shankarar.  The temple houses many idols of  sages like Sage Vyasa , Sage Parasar, Sage Agastya , Sage Ankiresar, Sage Pulasthiar.

Full moon days of every month is highly special here, where there are lot of special pujas done here. Navratri days are filled with special worships all the day long. Along with these, Tuesdays and Fridays take prominence, where the temple is flocked by female worshippers. Month of Aadi is highly special. Brahmorchavam, is an annual festival, celebrated during the Tamil month of Vaigasi. Festivals like Deepavali , and Pongal is also celebrated with pomp and glory.

Goddess Kamakshi is the mother for all living being, and is considered as highly benevolent. She bestows the boon upon her devotees, who worship her with faith. Many childless couples would pray to her during Fridays, and get progeny, as a gift of the Goddess. People looking for a spouse, would have their wedding bells ringing. Good health and peace of mind are also bestowed by her.

How to reach Kalikambal Temple

The best way to reach Kalikambal Temple by air is to reach the Chennai Airport, which is both National and internationally connected.

The nearest Railway station is Chennai City, which is located very close to the temple premises.

The nearest bus stop to the temple is the George Town. There are other modes of road transport available in this area.