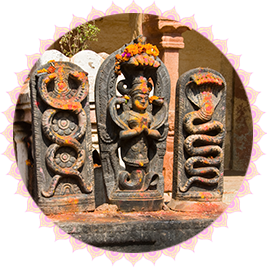 Nagula Chavithi (4th day of the lunar month) is considered as an auspicious day to perform the Naga Puja (serpent worship) ritual. The day is observed on the Chaturthi (fourth day) after Amavasya (new moon) during the Hindu month of ‘Karthika’. The festivals of Nag Panchami and Nagasaki are observed after Naga Chaturthi. On the auspicious occasion of Nagula Chavithi, Nag Devatas (Snake Gods) are worshipped. It is mainly observed by married women who pray for the well-being of their children. On this day, women observe a ‘Vrat’ (fast) and offer prayers to propitiate the Snake God (Naga Puja).

During Nagula Chavithi, Ashtanga (eight hooded cobras) is worshiped and appeased. Milk, dry fruits and sometimes even eggs are offered to ‘Sarpa Devata’ at the ‘Valmeeka’ or ‘Putta’ (snake pits), to appease the Snake God. Nagula Chavithi is celebrated in a big way, in many parts of Andhra Pradesh and Karnataka. 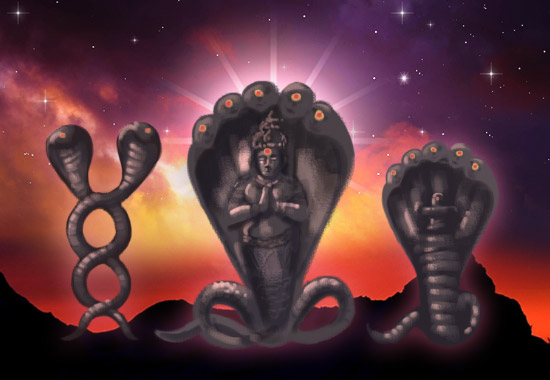 Several Gods in the Hindu pantheon are closely associated with snakes, and snake worship has a significant place in Hinduism. Lord Shiva is also referred to as ‘Naga Bhushan’ and portrayed with a snake wrapped around his neck, while Lord Vishnu is known as ‘Sesha Thalpa Sai’, with the serpent God serving as his bed. Lord Ganesh is also referred to as ‘Naga Yajnopaveetha’ and Lord Kumara Swamy (Muruga) as ‘Naga Swarupa’.

During the churning of the cosmic ocean (Samudra Manthan) by the Gods and demons in search of nectar, a serpent was used as a rope. The process first unearthed the ‘Halahala’ poison, which had tremendous negative implications for the world. But, Lord Shiva swallowed it, and as a result, his throat turned blue. This earned him the moniker ‘Neelakantha’ (blue throat). However, a few drops did spill on the Earth and ever since people started the ritual of snake worship to protect themselves from the evil effects of the poison.

The significance of Nagula Chavithi

The worship of snakes is an integral part of Hindu culture and holds tremendous religious significance. Snakes are considered helpful in many aspects in rural areas, especially by the agricultural community. During the winter, snakes emerge from their pits and consume the rats which destroy crops. Snakes also kill harmful micro-organisms in fresh water. Thus, Nagula Chavithi is observed to express gratitude to snakes, which play a vital role in making the soil fertile for crops. Snakes also occupy an exalted position in astrology, as the planet ‘Rahu’ represents a snake.

In keeping with the tradition of most Hindu rituals, having a bath early in the morning is considered a must. On the occasion of Nagula Chavithi, devotees install the idol of Naga Devata in the prayer altar and perform Puja to the deity. Many people visit the ‘Putta’ (snake burrow) to offer ‘Prasad’ to the Snake God.

Offerings of Naivedhyam of sesame laddus, a dish made of lentils, and a sweet dish made of Rice flour and jaggery are made to the snake deity. Pujas are performed with flowers, cow milk, turmeric, kumkum, bananas, tamboolam, and rice flour.

Rahu is a Nodal planet. It does not own any sign in the natural zodiac. However, it acts as an agent for the owner of the sign in which it is places...

Rahu is a Nodal planet. It does not own any sign in the natural zodiac. However, it acts as an agent for the owner of the sign in which it is placed...

Rahu Yantra can steer you clear of materialism and set you on the path to true riches. Imagine the power of being able to view anything...